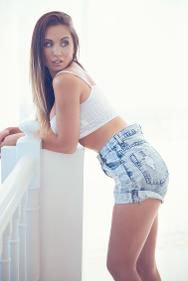 Bio: Caetlyn Armstrong grew up in a small town outside Melbourne called Healesville in Australia. She is very family orientated and close with her Mum, Dad and two brothers. They all grew up on motorbikes and Caetlyn owned horses, chickens and a Blue Heeler Australian Cattle Dog. At 18 Caetlyn moved closer to the city to be closer to modelling work and had a keen passion for photographic modelling of swimwear and glamour, and promotional or TV work. She was one of the lucky ones able to go to the Playboy Mansion in 2011 and be a painted girl for one of Hef's parties in LA. She then was sponsored to attend the Kandy Land Party, Kandy Kruise Party and the Halloween Party at the Mansion. Caetlyn has traveled frequently to the US for photo-shoots and modelling events. She now resides in the Sunshine Coast North Australia where she can be nearer the joy of the ocean and has now taken up wake boarding and mountain bike riding with her Siberian husky, Kendi. She is the founder of the amazing online shoe store Golden Zebra

Dislikes: People who talk while watching movies! Hate it! and Gamers!