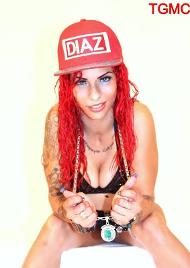 MzLady Roszea is more than just a pretty face. The rapper/actress/dancer/model is highly motivated and driven to be a well rounded artist. She is determined to make her mark and become a mogul in the entertainment industry. Personally the thing that stood out to me most about her is her willingness to learn from the best and grow as a person and as an artist. Don't sell this Lady short she is focused. Keep an eye out for MzLady Roszea. My bet is you will be seeing a lot of her in the near future, ... probably riding down I-95 (inside joke).  And Now... The Interview.

Actress/Rapper/Model... Which do you prefer? Which one would be most important to you if you could only do one?

Being a musician is my number one preference and likewise is most important if only having to choose one. As a musician, not only do I create and perform music, but I'm the sole spokes model/actress/dancer in my movement. Allowing me to still take part in all these crafts.

What do you hope to achieve in life and in the entertainment business?

To be well-rounded and soak in as much knowledge as possible. To further pass on & give back to the Arts & Education. Create exceptional music & performances. BROADWAY!! & the list could go on truly..

Who are the top 5 artists in your music playlist?

What do you want the people to know about MzLady Roszea?

Don't let my looks fool ya... sweet as pie till crossed..

Where are you from and where do you reside?

In a starring role of your choice, who would be your leading man and what kind of movie would it be?

Kendrick Lamar.. Behind the scenes on tour, or well I suppose a intense action film.

What is your favorite style of dance? Why?

FREESTYLE, because I can combine all forms of dance into one. If I so choose. FREEDOM to express myself ultimately.

With so many things on your plate what do you do for fun?

Rose is my middle name. Friends & the kids on the block would call me Rose, Rosie, hit it with some slang. When it came down to having a name it was already there Roszea.. MzLady is from the high standards I hold on myself & as a friendly reminder to be a respectable MzLady at all times. Who doesn't want some @SipRoszea?

What projects are you currently working on?